12,80
0,00 (0,00%)
Real-Time
Markt Geöffnet
12,80
BTC Holders Reduce Spending, Why Bitcoin Could Get More Rocket Fuel
26 Oktober 2021 - 12:22AM
NEWSBTC
Bitcoin trends to the upside in the daily chart after experiencing some downside action during the weekend. As of press time, the benchmark crypto trades at $63,136 with a 3.8% profit in the 24-hour chart. The rally has been driven by an increase in institutional demand as the first Bitcoin-linked Exchange Traded Funds (ETFs) in the U.S. have been rollout. Both products experienced a record in trading volume with ProShares’ product surpassing the launch of the Gold ETF by reaching $1 billion in less than 3 days. $BITO just about at $1b in total volume today (curr $993m but trades still trickling in). Easily the biggest Day One of any ETF in terms of 'natural' volume. It also traded more than 99.5% of all ETFs (incl some bigs like $DIA, $ARKK, $SLV). It def defied our expectations.. pic.twitter.com/rWIPSAJboT — Eric Balchunas (@EricBalchunas) October 19, 2021 This propelled the Chicago Mercantile Exchange (CME) Open Interest to the stratosphere setting a new all-time high of $5.44 billion for futures contracts, a report by Glassnode indicated. The CME OI has risen by over 265% in October 2021 alone, as seen in the chart below. Related Reading | TA: Bitcoin Price Faces Hurdle, Why 100 SMA Is The Key The derivates market has been heating up across the board with the funding rates going positive as Bitcoin moves higher. This has triggered a FOMO effect which led to a correction as over-leverage traders were shaken out in the past days. Bitcoin seems to be making quick recoveries and holding on to $60,000 as critical support, but as Glassnode noted an over-heated futures sector put the entire market at risk of further downside price action. (…) funding rates remain at similar levels as observed just prior to the early September flush out. With futures open interest remaining near all-time highs, a risk of further downside to clear even more leverage does remain in play. Bitcoin Investors Expect More Gains In support of the current optimistic general sentiment in the crypto market, Glassnode noted a reduction in activity by long-term holders. These investors were taking profits for the past 2 weeks following a period of accumulation. Related Reading | Is China Considering Lifting The Bitcoin Mining Ban? The NDRC Runs Public Survey As the research firm explained, Bitcoin long-term holders (LTH) exhibited a typical behavior as BTC’s price entered price discovery. As the chart below shows, there seems to be an inverse correlation between the total BTC supply held by LTHs and the price of this cryptocurrency. Whenever there is a reduction in LTHs spending, the price of Bitcoin tends to the upside in a massive rally as seen in late January and early February 2021. Related Reading | On-Chain Data Shows Surge In Stablecoins Supply Pouring Into Bitcoin When combining the behavior of LTHs, already resuming their BTC accumulation, with that of Short-term holders (STH), Glassnode concluded that the overall sentiment is for Bitcoin to reach new highs: (…) STHs have stopped spending during this correction. With LTH supply already starting to recover, the most likely interpretation is that the vast majority of coin holders are still expecting and waiting for higher prices.
Arweave (COIN:ARUSD)
Historical Stock Chart
Von Jan 2023 bis Feb 2023 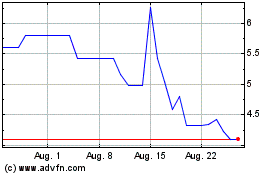 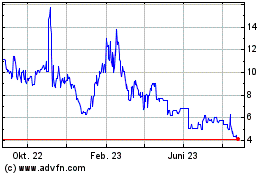 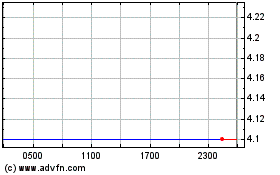