0,4447
-0,0032 (-0,71%)
Real-Time
Markt Geöffnet
0,4447
Cardano (ADA) Could Slide Back To $0.40 – But $0.68 Still Doable
18 Mai 2022 - 06:21AM
NEWSBTC
Cardano (ADA) price looks bullish as it does a U-turn on Monday following negative economic spikes from China getting crypto traders all worried. In addition, many major corporations are exiting Russia, including McDonald’s. All of these factors contribute to heightened risk sentiment making it entirely difficult for major cryptocurrencies to elevate in price than usual. This could also mean bad news for ADA; risking a 32% correction. The negative sentiment has been growing enormously which also signal a downward trend in the next quarters. As of this writing, the crypto is trading at $0.560514 on Coingecko, Wednesday, down 10% in the last seven days. Suggested Reading | Ripple (XRP) Price Picks Up As SEC Legal Showdown Drags On ADA Heading For A Nosedive Below $0.40 Tail risks pad up incessantly and it doesn’t seem to end which could mean ADA investors might head for the exit anytime soon. ADA price is heading for a nosedive right below the $0.47 price point or at the low end of the distribution zone which could even reach $0.38. On the brighter side, with the developments happening in the global economics and to the Cardano community, the first trading day of the week has shown promise of recovery. In fact, ADA price could possibly go towards $0.687 and move up to $0.915. ADA total market cap at $18.09 billion on the daily chart | Source: TradingView.com Even though Cardano suffered a massive drop during the past week, it managed to recover and reach $0.613 on May 16. Meanwhile, Cardano is currently shaking it off after its gains of 4%. Suggested Reading | Crypto Analyst Predicts 1 Altcoin Will Fall Down Hard – Is It Cardano? It went through a three-day bounce right there as shown over the weekend. The whale activity was seen for Cardano which signaled a deviation in price direction. Cardano TVL is at around $174.74 million. Now, it may seem like the increase is totally insignificant but it’s a winning jump since it has been steadily declining from its peak TVL of $434.74 million in the first quarter or March 28. The difference between cardano and the other alts. They pay to do stuff like this. The Cardano Community just does it themselves out of love for the ecosystem and philosophy. We got marketing. It's three million strong and growing. https://t.co/cRdnmGZPZz — Charles Hoskinson (@IOHK_Charles) May 16, 2022 Cardano Flag On Mount Everest Summit Charles Hoskinson, Cardano Founder, is loud and proud to have reached the Mount Everest summit. He was ecstatic about the raving support of the community. His remark saying “we got marketing,” definitely speaks volumes of his optimism despite the downward trend that ADA has displayed the previous days. The Cardano CEO is proud to have a strong and dedicated community comprised of 3 million members and still growing. The native tokens of Cardano also went up to 4.7 million. Moreover, Cardano has also managed to get $20 million more in funding since Mary 13. Its TVL has jumped from 18 million a few days ago to $137 million on May 16 – that is a 6% change of TVL in a matter of 24 hours. Featured image from Coinbase, chart from TradingView.com
Cardano (COIN:ADAUSD)
Historical Stock Chart
Von Jun 2022 bis Jul 2022 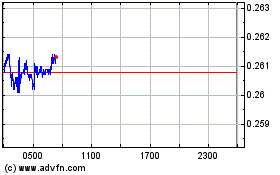