GET THE LATEST NEWS AND INFORMATION
adamsfunds.com/sign-up​
​
Letter to Shareholders
​
Dear Fellow Shareholders,
Persistent inflation, rising interest rates and quantitative tightening from the U.S. Federal Reserve (Fed), the U.S. dollar’s surge, and cloudy economic data stoked fears of a recession and high levels of volatility during the third quarter. Investors wrestled with a lot of questions with few readily evident answers. Are we in a recession? On the verge of one? How deep and how long will it be? How far will the Fed go in terms of tightening? Has inflation peaked, or will it soon? How high will the dollar go and how will that impact the global economy? Meanwhile, geopolitical questions lurked in the background. What’s the end game in Ukraine, where there appears to be no end in sight and Russia has threatened the use of nuclear weapons? How much and for how long will China’s economy slow, given the government’s COVID-zero policy? What’s the future of Taiwan?

Mark E. Stoeckle
Chief Executive Officer
October 20, 2022
3
​
Summary Financial Information
​
(unaudited)
​
*
Annualized
​
Ten Largest Equity Portfolio Holdings
​
September 30, 2022
(unaudited)
4​
​
Schedule of Investments
​
September 30, 2022
(unaudited)
5
​
Schedule of Investments (continued)
​
September 30, 2022
(unaudited)
6​
​
Schedule of Investments (continued)
​
September 30, 2022
(unaudited)
​
(a)
Common stocks and warrants are listed on the New York Stock Exchange or NASDAQ and are valued at the last reported sale price on the day of valuation.
​
(b)
Presently non-dividend paying.
​
(c)
Rate presented is as of period-end and represents the annualized yield earned over the previous seven days.
​
Information regarding transactions in equity securities during the quarter can be found on our website at: www.adamsfunds.com.
​
Disclaimers
This report contains “forward-looking statements” within the meaning of the Securities Act of 1933 and the Securities Exchange Act of 1934. By their nature, all forward-looking statements involve risks and uncertainties, and actual results could differ materially from those contemplated by the forward-looking statements. Several factors that could materially affect the Fund’s actual results are the performance of the portfolio of stocks held by the Fund, the conditions in the U.S. and international financial markets, the price at which shares of the Fund will trade in the public markets, and other factors discussed in the Fund’s periodic filings with the Securities and Exchange Commission.
This report is transmitted to the shareholders of the Fund for their information. It is not a prospectus, circular or representation intended for use in the purchase or sale of shares of the Fund or of any securities mentioned in the report. The rates of return will vary and the principal value of an investment will fluctuate. Shares, if sold, may be worth more or less than their original cost. Past performance is no guarantee of future investment results.
7​
​
[This Page Intentionally Left Blank]
​
Adams Natural Resources Fund, Inc.
​
Board of Directors
​
(1)
Member of Executive Committee
​
(2)
Member of Audit Committee
​
(3)
Member of Compensation Committee
​
(4)
Member of Nominating and Governance Committee
​
(5)
Chair of the Board
​
Officers
​
500 East Pratt Street, Suite 1300, Baltimore, MD 21202
410.752.5900   800.638.2479
Website: www.adamsfunds.com
Tickers: PEO (NYSE), XPEOX (NASDAQ)
Independent Registered Public Accounting Firm: PricewaterhouseCoopers LLP
Custodian of Securities: The Northern Trust Company
Transfer Agent & Registrar: American Stock Transfer & Trust Company, LLC
Stockholder Relations Department
6201 15th Avenue
Brooklyn, NY 11219
(866) 723-8330
Website: www.astfinancial.com
Email: info@astfinancial.com
Adams Natural Resources (NYSE:PEO)
Historical Stock Chart
Von Jan 2023 bis Feb 2023 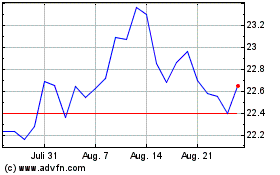 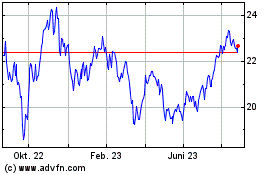 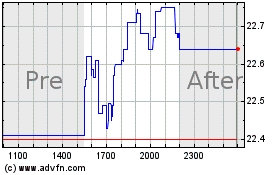