111,14
1,57 (1,43%)
Real-Time
Markt Geöffnet
111,14
Bitcoin Cash Loses 10% In Last 24 Hours, Despite 40% Hike In Trading Volume
29 August 2022 - 01:33PM
NEWSBTC
Bitcoin Cash had shed 24% of its value in the previous 12 days. Leading coins like Bitcoin (BTC) and Ethereum (ETH) have also experienced double-digit losses over the past 26 days as a result of the broader market slump.         BCH support present at $113.2         Bitcoin Cash key resistance spotted at $117.44         BCH price currently trades at $115.65 Bitcoin Cash has already shed 10% of its value in the last 24 hours. This, despite enjoying 40% increase In trading volume in the last 30 days. Since the start of the month, the total market capitalization of cryptocurrencies has decreased by nearly 5%. The broader market slump has had an effect on Bitcoin Cash (BTC), which has a strong positive correlation with BTC. More so, BCH increased by 40% in value over the past 30 days, trading at $145.92 as of August 15. The assessments of BCH’s price changes on a daily chart also did not provide optimistic information. Investors have steadily dropped their BCH holdings since August 19. Meanwhile, Relative Strength Index (RSI), Money Flow Index (MFI), and Chaikin Monkey Flow (CMF) were all pushed below their respective neutral zones by the increase in coin distribution. Related Reading: Flow Monitoring: Why This Price FLOW May Not Attract Short-Term Traders Bitcoin Cash Price Trading At $115.65 According to CoinMarketCap, Bitcoin Cash price is trading at $115.65 or up by 0.05% as of press time. The RSI was seen at 40 as per the time of writing. The coin had an MFI of 39 and a CMF of -0.20. The buying pressure for the BCH coin had weakened during the previous three days. At around $113.894348144531, Bitcoin Cash is currently trading close to its five-day low. The cryptocurrency is 3.73% higher than its five-day low of $113.89 and 14.46% lower than its five-day high. The price of Bitcoin Cash is currently over the barrier. In the event that the rally fizzles out, Bitcoin Cash might be in a volatile position with support located at $113.2 and resistance at $117.44. Recent Bitcoin Cash trading has been rather quiet. This indicates that today’s volume is lower than the volume average for the previous seven days. BCH Investors Losing Money? Since August 15, fewer distinct addresses have exchanged BCH currency. At the time of publication, there were 16,400 daily active addresses on the BCH network. In the past 12 days, it has decreased by more than 71%. During the same time period, the network’s transaction volume also decreased by more than 50%. BCH’s transaction volume, measured in USD, dropped from $93.79 million to $9.63 million in less than 15 days. As for mining on the network, rewards obtained by miners from transaction fees and the block subsidy since 15 August have increased by 10%, notwithstanding the decline in the price per BCH coin during the time under review. According to the 30-day Market Value Realized Value (MVRV), the percentage of BCH investors who made money in the last month was negative (-16.58). This statistic also recorded a negative value of -51.21 over a 365-day period. This highlighted the fact that many BCH investors have lost money since last year. Related Reading: Tezos (XTZ) Nurses From Bad Fall In Last 7 Days After Binance Asset Freeze Crypto total market cap at $928 billion on the daily chart | Source: TradingView.com Featured image from sFOX, chart from TradingView.com
Bitcoin Cash (COIN:BCHUSD)
Historical Stock Chart
Von Nov 2022 bis Dez 2022 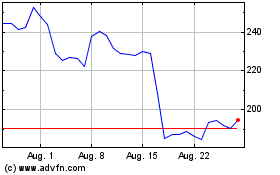 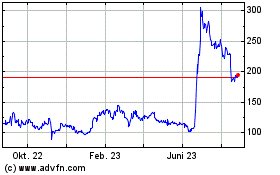 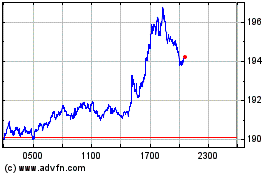