5,11
0,00 (0,00%)
Real-Time
Markt Geöffnet
5,11
Huobi Token (HT) Records Higher Gains When Top Coins Struggle
26 Oktober 2022 - 09:47AM
NEWSBTC
The cryptocurrency market is currently experiencing some turbulence, and many coins are struggling to keep up with their peers. However, one coin is bucking this trend and gaining momentum at an impressive rate. Huobi token is on the road to being the most profitable crypto of October. The token has recorded high gains in a market filled with turbulent price actions. Huobi token’s exponential profit comes as news of Justin Sun’s advisory role at Huobi Capital surfaces. The popular entrepreneur made several bullish remarks about HT on Twitter which caused the token to surge higher.  Related Reading: Ethereum Leads Crypto Rebound, ETH Price Heads For $1,500 Huobi is currently enjoying a massive rally. Its current price action shows that it could end the month even stronger than it started. If it can continue to climb, it will likely reach new highs by November. Huobi Token Records Massive Gains in October October is known to be a bullish month for the entire crypto market. It’s that one month when every coin experiences a massive increase in value. However, this October has been anything but normal. Many top cryptocurrencies have struggled to maintain their recent gains. Despite coins like Bitcoin and Ethereum starting out strong, they’re still struggling to keep decent gains. Bitcoin even traded below its $19k mark yesterday. Huobi is also one coin that started October on the wrong foot. However, it quickly turned things around and began climbing again. The Huobi Token (HT) is currently trading at $9.26. Looking at its price range since the beginning of the month, you’ll notice it has gained quite a lot within weeks. More specifically, the Huobi token traded at $4.43 starting in October. It took a short dive the next few days, touching $3.99 on October 2nd. After 10 days, it regained momentum and started making bullish jumps. Between October 1st and today, 25th, Huobi has kept gains of over 105%. This is a huge gain for any coin, especially one that’s not as well-known as others. Huobi Token Pump Courtesy of Justin Sun’s Announcement HT’s massive gains can be attributed to Justin Sun’s announcement of owning tens of millions of HT tokens. Justin Sun, the founder of the TRON Network, took up an advisory role at Huobi Global this month. Sun remarked last week on Bloomberg TV, “I would perceive myself as one of the biggest holders.” However, he insisted that he had yet to buy a share in the exchange. Shortly after Sun made his Bloomberg TV interview, Chinese journalist Colin Wu reported that Huobi had transferred 74 million HT to Sun’s wallets. The HT token currently has a maximum supply of 500 million, with 130 million in circulation. Related Reading: This Bitcoin On-chain Retest Can Change Market’s Course, Here’s How According to Sun, Huobi Token (HT) is the company’s “core value.” Furthermore, he emphasized that for the exchange to become one of the “most significant” trading platforms in the world, HT needs to be “pushed vigorously.” The Tron creator said he wanted to focus on Huobi’s worldwide development. He also mentioned plans to return the company back to China—if regulators allow. Featured image from Pixabay and chart from TradingView.com
Huobi Token (COIN:HTUSD)
Historical Stock Chart
Von Dez 2022 bis Jan 2023 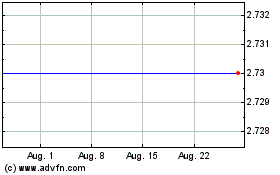 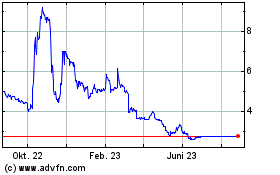