290,56
-1,21 (-0,41%)
Real-Time
Markt Geöffnet
290,56
Chainlink Price Spikes Above $7 While Bitcoin Sinks Below $20,000
26 September 2022 - 04:16PM
NEWSBTC
Among other investment assets, cryptocurrency is prominent when it comes to volatility in prices, including altcoins such as Chainlink. While an uptrend matters a lot to daily traders, dipping could be favorable for accumulation for long-term investment. The crypto market over the weekend saw slight positive progress in the prices of most tokens. The past week was downward, but this week could bring more hope. General analysis on a 24-hour scale for most altcoins shows that last Sunday came with a commendable trend. The majority of the tokens displayed significant progress in an uptrend. Chainlink native token, LINK, was at the forefront, among others. Related Reading: Litecoin Price Watch: Why Only 15% of LTC Holders Are Making Profit But the story is quite different for the primary cryptocurrency. After moving to the $19,000 region, BTC stalled on the level through the weekend. Chainlink Leads As The Top Performer The crypto market witnessed a positive turnaround, especially with the price performance of the altcoins. The total market cap has stalled with the outcome without making another drop. The value is currently around the $950 billion level. LINK, the native coin of the leads as the best performer among the altcoins. The token increased by above 5% in the early hours of trading today with an approximate price of $8. For Ethereum, there is a progressive reclaiming from its 20% post-merger drop. ETH swung into the green as the price crossed the $1,300 level. Other altcoins increased in their values. These include Solana (SOL) and Shiba Inu (SHIB), which rose slightly. However, for Cardano (ADA), the price stalled on a particular level despite the recent launch of the Vasil Upgrade. Some crypto assets with a slight dip include Polkadot, Ripple, Polygon, Binance Coin, Dogecoin, Tron, and Avalanche. BTC Stagnates At Around $19,000 The performance of Bitcoin over the past week has not been quite impressive. However, it is notable that before the US Federal Reserve’s rate increase, BTC made an upward jump. The token surged from $18,300 to around $20,000. However, its sustainability was short-lived. The announcement of the 75 bps rise in interest rates caused a drastic drop in the price of BTC. The primary crypto asset lost almost $2,000 in value within hours following the announcement. Bitcoin plummeted to a new 3-month low of $18,100. The crypto market was thrown into another panic as the selling pressure increased. But after a few days, the price of BTC reclaimed slightly and crawled to the $19,000 level. Then, as the market encountered more bulls, Bitcoin climbed up to $19,500 through the trading hours between last Sunday and today. Related Reading: Dogecoin (DOGE) Is On Top Of Whales’ Menu – Here’s Why At the time of writing, BTC is trading around $19,187, depicting a 0.71% increase over the past 24 hours. Its dominance over the altcoins has returned to 39%, while its market cap is almost about $365 billion. Featured image from Pixabay, Chart: TradingView.com
Binance Coin (COIN:BNBUSD)
Historical Stock Chart
Von Nov 2022 bis Dez 2022 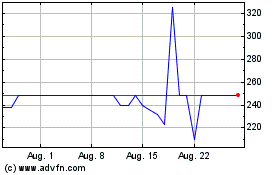 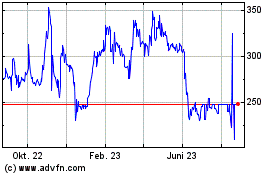 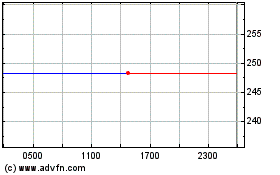