(Name of Person(s) Filing Proxy Statement, if other than the Registrant)
Payment of Filing Fee (Check the appropriate box):

TORTOISE ENERGY INFRASTRUCTURE CORPORATION
TORTOISE POWER AND ENERGY INFRASTRUCTURE FUND, INC.
TORTOISE MIDSTREAM ENERGY FUND, INC.
TORTOISE PIPELINE & ENERGY FUND, INC.
TORTOISE ENERGY INDEPENDENCE FUND, INC.
ECOFIN SUSTAINABLE AND SOCIAL IMPACT TERM FUND
6363 College Boulevard, Suite 100A
Overland Park, Kansas  66211
ADDITIONAL INFORMATION REGARDING THE ANNUAL MEETING OF SHAREHOLDERS TO BE HELD ON TUESDAY, AUGUST 9, 2022
Dear Fellow Stockholder:
The Definitive Proxy Statement was filed jointly by each of Tortoise Energy Infrastructure Corporation (“TYG”), Tortoise Power and Energy Infrastructure Fund, Inc. (“TPZ”), Tortoise Midstream Energy Fund, Inc. (“NTG”), Tortoise Pipeline & Energy Fund, Inc. (“TTP”), Tortoise Energy Independence Fund, Inc. (“NDP”) and Ecofin Sustainable and Social Impact Term Fund (“TEAF”) (each a “Company” and collectively, the “Companies”) on June 24, 2022 (the “Original Filing”).  This a reminder to vote your shares.
Voting is quick and easy.  You may vote your shares via the internet, by telephone (for internet and telephone voting, please follow the instructions on the proxy ballot), or by simply completing and signing the proxy ballot mailed to you, and mailing it in the postage-paid envelope included in this package. You may also vote by attending and voting at the meeting. However, even if you plan to attend the meeting, we urge you to cast your vote early.  That will ensure your vote is counted should your plans change.
The Board of Directors of each of TYG, NTG, TTP, NDP and TEAF unanimously recommends that you vote “FOR” all proposals on the proxy card.  The Board of Directors of TPZ unanimously recommends that you vote “FOR” the proposal to elect two directors and the proposal to ratify the Company’s independent registered public accounting firm and “AGAINST” the Shareholder Proposal.
As a reminder to shareholders, the Companies have opted into and is subject to the provisions of the Maryland Control Share Acquisition Act (the “MCSAA”). Generally, the MCSAA provides that a holder of “control shares” (as defined in the MCSAA) of a Maryland corporation acquired in a “control share acquisition” (as defined in the MCSAA) will not be entitled to vote its control shares unless the other shareholders of the corporation reinstate those voting rights at a meeting of stockholders by a vote of two-thirds of the votes entitled to be cast on the matter, excluding the “acquiring person” (i.e., the holder or group of holders acting in concert that acquires, or proposes to acquire, “control shares”) and any other holders of “interested shares” (as defined in the MCSAA).
Generally, “control shares” are shares that, when aggregated with shares already owned by an acquiring person, would entitle the acquiring person to exercise 10% or more, 33 1/3% or more, or a majority of the total voting power of shares entitled to vote in the election of directors. The MCSAA does not apply (a) to shares acquired in a merger, consolidation or share exchange if the corporation is a party to the transaction, (b) to shares acquired under the satisfaction of a pledge or other security interest created in good faith and not for the purpose of circumventing the MCSAA, or (c) to acquisitions of shares approved or exempted by a provision contained in the charter or bylaws of the corporation and adopted at any time before the acquisition of the shares. Shareholders (together with any “associated persons” (as defined in the MCSAA)) that own less than ten percent of the shares entitled to vote in the election of directors are not affected by the restrictions on voting rights under the MCSAA.
Accordingly, any holder of each of the Company’s outstanding shares that is deemed to hold “control shares” under the MCSAA will not be entitled to vote its control shares at the annual meeting.
Tortoise Pipeline and En... (NYSE:TTP)
Historical Stock Chart
Von Nov 2022 bis Dez 2022 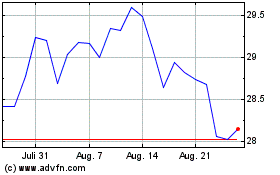 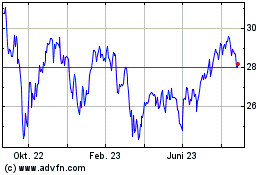 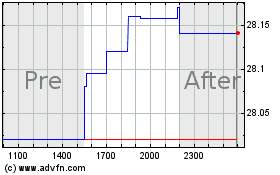