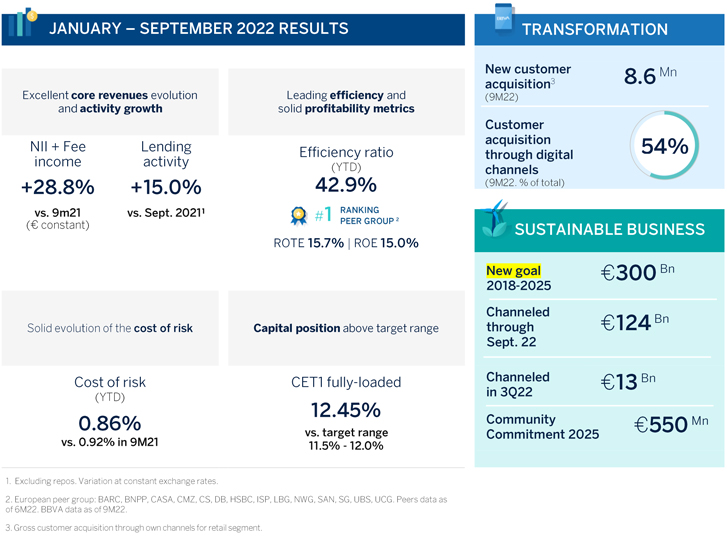 Except where otherwise stated, in order to better understand the evolution of each of the main headings, changes in the income statement described below refer to constant exchange rates. In other words, they do not take currency fluctuations into account. In addition, figures for Turkey for 2022 are under hyperinflationary accounting.

In the first nine months of 2022, BBVA achieved good results, despite the uncertainty following the invasion of Ukraine and its impact on inflation and global economic growth.

Net interest income (NII) climbed to €13.81 billion through September, up 32.6 percent yoy, thanks to significant growth in lending (+15 percent vs. Sept. 2021) and improved customer spreads. Performance in this heading especially stands out in Mexico, Turkey and South America. Net fees and commissions increased 17.4 percent during the same period, reaching €4.03 billion, again bolstered by activity in emerging markets. Together, NII and net fees and commissions, which represent recurring revenue in the banking business, posted a yoy increase of 28.8 percent through September, reaching a total of €17.84 billion.

Net trading income (NTI) stood at €1.67 billion (+17.4 percent yoy), thanks to greater activity in leading markets from the Global Markets unit. The line reflecting ‘other operating income and expenses’ had an accumulated result of € -1.15 billion as of Sept. 30, 2022, primarily due to a negative adjustment for hyperinflation in Argentina and Turkey, and a higher contribution to the Single Resolution Fund (SRF).

Operating expenses grew 14.5 percent in the first nine months of the year amid high inflation at a global level. Nevertheless, this figure is below the average inflation rate in the countries where BBVA operates (16.5 percent). Additionally, and thanks to the strength of gross income, jaws remained positive, with the efficiency ratio standing at 42.9 percent at the end of September. This figure is the best among comparable European peers, showing an improvement of 249 bps from September 2021.

Operating income saw a yoy increase of 26.7 percent between January and September 2022, reaching €10.49 billion. In 3Q22 alone, this heading stood at €4.04 billion, an increase of 44.9 percent compared to the same period a year earlier.

Impairments of financial assets increased 6.4 percent, largely due to higher activity. The accumulated cost of risk rose to 0.86 percent, compared to 0.81 percent in 2Q22, in line with expectations for 2022, (below the 100 bps, with levels similar to those of 2021). The NPL ratio improved from 3.7 to 3.5 percent in 3Q22, and the NPL coverage ratio increased from 78 to 83 percent.

2 This includes the net impact of the purchase of offices in Spain from Merlin in June 2022, the result of discontinued operations from BBVA USA and the other companies sold to PNC on June 1, 2021 and the net cost related to the restructuring process the same year. 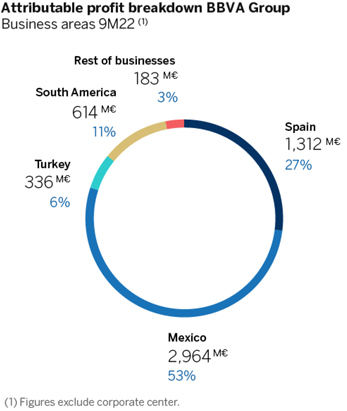 In terms of profitability, BBVA continues to make headway, quarter after quarter, securing leading positions in the European banking sector. ROE rose to 15 percent and ROTE to 15.7 percent at the end of September. The Group continues to create value for shareholders: net tangible book value plus dividends stood at €7.66 per share at the end of September, which represents a 20 percent increase yoy. This figure includes the €0.12 gross interim per share dividend that BBVA paid on October 11, against 2022 earnings. This is 50 percent higher than the October 2021 dividend.

BBVA maintains a solid capital position, with a fully-loaded CET1 ratio of 12.45 percent, above the Group’s target range (11.5-12 percent). 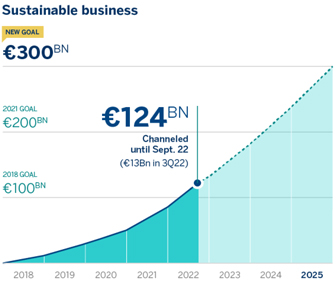 In the first nine months of the year, a record 8.6 million new customers joined BBVA. This is more than 2.5 times the customer acquisition figures from five years ago. Over half of these new customers (54 percent) joined through digital channels. In addition, their level of engagement increases significantly shortly after their onboarding. In Spain, specifically, 71 percent of new customers become target customers3 in just six months.

3 Target customers are customers the bank wants to increase in number and retain, as they are considered highly valuable due to their level of assets, liabilities or transactions at BBVA.

In Spain, growth in lending stood out (+4.6 percent yoy), on the back of greater activity in businesses and consumer segments. Customer funds grew 2.7 percent, supported by an increase in demand deposits. Spain posted a recurring net attributable profit of €1.51 billion through September 2022 (+27.1 percent yoy) thanks to growth in NII, net fees and commissions and NTI, as well as lower operating expenses and provisions. This does not include the € -201 million net impact from the acquisition of offices in Spain from Merlin in 2Q22. If this impact is included, net attributable profit would be €1.31 billion at the end of September - up 10.2 percent. The accumulated cost of risk stood at 0.24 percent, in line with expectations. The NPL ratio improved 13 basis points in 3Q22, reaching 3.9 percent. The NPL coverage ratio also improved from June, standing at 64 percent.

Thanks to this income growth, the efficiency ratio improved sharply (351 bps) to 31.9 percent. The bank posted a net profit of €1.09 billion in 3Q22. Compared to the end of June, the accumulated cost of risk remained stable at 2.57 percent, while the NPL and the NPL coverage ratios improved to 2.5 percent and 133 percent, respectively.

In Turkey, lending in Turkish lira grew 62.9 percent yoy, while loans in U.S. dollars dropped 21.6 percent, in line with the strategy to reduce exposure to this portfolio. Customer funds in Turkish lira saw a strong increase (+92.4 percent), to the detriment of deposits in U.S. dollars, which fell 4.4 percent. Net attributable profit for Turkey stood at €336 million through September 2022. This includes the impact from hyperinflationary accounting. As for risk indicators, the cost of risk remained virtually stable in 3Q22, at 0.89 percent. The NPL and the NPL coverage ratios improved to 5.6 percent and 86 percent, respectively.

In South America, lending activity grew 14.7 percent and customer funds rose 15 percent yoy. This business area posted a net attributable profit of €614 million through September, up 98.3 percent yoy, mostly supported by the increase in NII. The cost of risk stood at 1.43 percent. The NPL ratio improved slightly, to 4.1 percent, while the NPL coverage ratio reached 100 percent. Net attributable profit in Colombia and Peru stood out, thanks to the good performance of operating income, together with lower impairments. Argentina improved its contribution, primarily due to recurring revenues. 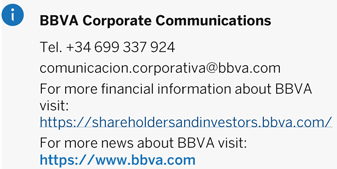 (1) Discontinued operations and non-recurring results include the negative impact of €201 M due to the agreement reached with Merlin for the purchase of 662 branches in Spain in 2Q22.

(1) Discontinued operations and non-recurring results include US business sold to PNC and net cost related to the restructuring process in 9M21, and the negative impact of €201 M due to the agreement reached with Merlin for the purchase of 662 branches in Spain in 9M22.

BBVA is a customer-centric global financial services group founded in 1857. The Group has a strong leadership position in the Spanish market, is the largest financial institution in Mexico and it has leading franchises in South America. It is also the leading shareholder in Turkey’s Garanti BBVA and has an important investment, transactional and capital markets banking business in the U.S. Its purpose is to bring the age of opportunities to everyone, based on our customers’ real needs: provide the best solutions, helping them make the best financial decisions, through an easy and convenient experience. The institution rests in solid values: Customer comes first, we think big and we are one team. Its responsible banking model aspires to achieve a more inclusive and sustainable society. 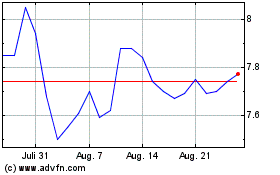 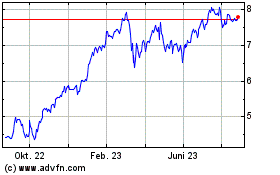