(805)
413-5300
(Registrant’s telephone number, including area code)
Not Applicable
(Former Name or Former Address, if Changed Since Last Report)
Check the appropriate box below if the Form
8-K
filing is intended to simultaneously satisfy the filing obligation of the registrant under any of the following provisions:
Securities registered or to be registered pursuant to Section 12(b) of the Act:
Indicate by check mark whether the registrant is an emerging growth company as defined in Rule 405 of the Securities Act of 1933 (§230.405 of this chapter) or Rule
12b-2
of the Securities Exchange Act of 1934
(§240.12b-2
of this chapter).
Emerging growth company  ☐
If an emerging growth company, indicate by check mark if the registrant has elected not to use the extended transition period for complying with any new or revised financial accounting standards provided pursuant to Section 13(a) of the Exchange Act.  ☐
On April 7, 2022, American Homes 4 Rent, L.P. (the “Operating Partnership”) completed the previously announced offering of $600,000,000 aggregate principal amount of 3.625% Senior Notes due 2032 (the “2032 Notes”) and $300,000,000 aggregate principal amount of 4.300% Senior Notes due 2052 (the “2052 Notes” and, together with the 2032 Notes, the “Notes”).
The Operating Partnership previously entered into an Indenture, dated as of February 7, 2018 (the “Base Indenture”), between the Operating Partnership, as issuer, and U.S. Bank Trust Company, National Association, as successor in interest to U.S. Bank National Association, as trustee (the “Trustee”). In connection with the issuance of the Notes, the Operating Partnership entered into the Fifth Supplemental Indenture dated as of April 7, 2022 (the “Fifth Supplemental Indenture”) relating to the 2032 Notes and the Sixth Supplemental Indenture dated as of April 7, 2022 (the “Sixth Supplemental Indenture”) relating to the 2052 Notes (the Fifth Supplemental Indenture and the Sixth Supplemental Indenture, together with the Base Indenture, the “Indenture”), between the Operating Partnership and the Trustee.
The 2032 Notes were issued at 97.517% of par value with a coupon of 3.625% per annum. The 2052 Notes were issued at 97.237% of par value with a coupon of 4.300% per annum. Interest on the Notes is payable semi-annually in arrears on April 15 and October 15 of each year, commencing October 15, 2022. The 2032 Notes will mature on April 15, 2032, and the 2052 Notes will mature on April 15, 2052. The Notes are the Operating Partnership’s unsecured and unsubordinated obligations and rank equally in right of payment with all of the Operating Partnership’s existing and future unsecured and unsubordinated indebtedness.
Under limited circumstances, the Indenture will require certain of the Operating Partnership’s subsidiaries and American Homes 4 Rent (the “Company”) to guarantee the Notes in the future if, and for so long as, such subsidiary or the Company, as the case may be, guarantees the Operating Partnership’s obligations under its revolving credit facility.
The Operating Partnership may redeem the Notes in whole at any time or in part from time to time, at the applicable make-whole redemption price specified in the Indenture. If the 2032 Notes are redeemed on or after January 15, 2032 (three months prior to the maturity date) or if the 2052 Notes are redeemed on or after October 15, 2051 (six months prior to the maturity date), the redemption price will be equal to 100% of the principal amount of the Notes being redeemed plus accrued and unpaid interest thereon to, but not including, the redemption date.
The Indenture contains certain covenants that, among other things, limit the ability of the Operating Partnership, subject to exceptions, to incur secured and unsecured indebtedness and to consummate a merger, consolidation or sale of all or substantially all of its assets. In addition, the Indenture requires the Operating Partnership to maintain total unencumbered assets of at least 150% of total unsecured indebtedness. These covenants are subject to a number of important exceptions and qualifications. The Indenture also provides for customary events of default which, if any of them occurs, would permit or require the principal of and accrued interest on the Notes to become due and payable.
The foregoing description is a summary of the terms of the Indenture and the Notes and does not purport to be a complete statement of the parties’ rights and obligations thereunder. The foregoing description is qualified in its entirety by reference to the full text of the Base Indenture and the Supplemental Indenture (including the form of Notes), a copy of which is attached as Exhibit 4.1 to this Current Report on Form
8-K
and incorporated by reference herein.
The offering was made pursuant to an automatic shelf registration statement filed with the Securities and Exchange Commission on June 17, 2020 (File
Nos. 333-239227
and
333-239227-01),
a base prospectus, dated June 17, 2020, and a prospectus supplement, dated March 31, 2022, filed by the Operating Partnership with the Securities and Exchange Commission pursuant to Rule 424(b) under the Securities Act of 1933, as amended.
The information set forth above under Item 1.01 is hereby incorporated by reference into this Item 2.03.
(d)
Exhibits.
SIGNATURES
Pursuant to the requirements of the Securities Exchange Act of 1934, as amended, the registrants have duly caused this report to be signed on their behalf by the undersigned hereunto duly authorized.
American Homes 4 Rent (NYSE:AMH-G)
Historical Stock Chart
Von Mai 2022 bis Jun 2022 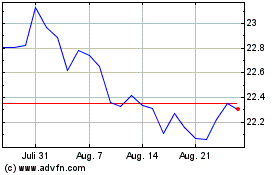 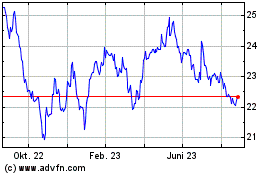 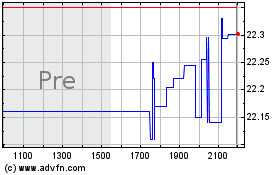