GET THE LATEST NEWS AND INFORMATION
adamsfunds.com/sign-up​
​
Letter to Shareholders
​
Dear Fellow Shareholders,
Broadly positive data continued to support the robust, ongoing economic recovery in the third quarter. However, the market was challenged by persistent supply chain disruptions, signs that surging inflation appears less transitory than many believed, and uncertainty surrounding the fate of major U.S. infrastructure spending bills. The Federal Reserve added to the mix, signaling it could start to taper its $120 billion monthly asset buying program as soon as its November meeting.
The market’s performance showed increasing levels of concern about the impact of those headwinds on the recovery. The “reopening” trade, which drove strong equity returns in the first half of the year as investors

Investments in Communications Services, Real Estate, and Utilities were notable contributors to the Fund’s relative performance.
​
pivoted from high-multiple technology names toward more cyclical companies, lost momentum during the quarter, especially in September. The S&P 500 declined 4.7% for the month. The market did, however, produce its sixth consecutive quarterly gain, finishing with a 0.6% advance. For the first nine months of 2021, the S&P 500 rose 15.9%, compared to 14.9% for our Fund.
The biggest questions relate to how long these issues will last. We believe inflationary pressures will be transitory, but we share the Federal Reserve’s uncertainty about how quickly they will ease. Likewise, we view the September downturn as more about investors taking some profits than a long-lasting crisis of confidence. Consumers appeared to pull back on spending as the Delta variant of COVID-19 spread during the summer, but they remain flush with record savings levels as the pandemic continues to wind down.
During the third quarter, the Communications Services, Real Estate, and Utilities sectors were notable contributors. The Consumer Discretionary and Consumer Staples sectors were among the largest detractors from the Fund’s relative performance.
Communications Services was one of the quarter’s strongest performing sectors in the S&P 500, rising 1.6%. Our holdings outperformed the benchmark, supported by an overweight position in Alphabet. The company’s Google search engine continues to produce impressive revenue growth that, when combined with a renewed focus on profitability, has been rewarded by investors. During the quarter, we also moved to an overweight position in Netflix. We believe the
1​
​
Letter to Shareholders (continued)
​
company’s significant investment in content in recent years will likely result in higher cash flow growth going forward.
Our Real Estate holdings were a source of relative strength during the quarter, outperforming the benchmark’s sector return by 0.6%. An overweight position in CBRE Group was the primary contributor, with shares rising 13.6% during the quarter. CBRE is the world’s largest commercial real estate advisory and leasing company, operating in more than 100 countries. While leasing activity is slowly increasing, CBRE’s advisory business has experienced robust growth.
Our Consumer Discretionary holdings declined 1.8% during the quarter, trailing the benchmark’s return. The portfolio was impacted by cyclical holdings such as V.F. Corporation, an apparel manufacturer, and BorgWarner, an auto parts maker, as the Delta variant of COVID-19 raised concerns about economic growth. An underweight position in Tesla also weighed on relative performance. The company’s electric vehicle and battery products continue to resonate with investors, despite the stock’s extraordinary valuation. We remain comfortable with our position despite the recent strength.
The Consumer Staples sector was also a relative detractor as the return on our sector holdings trailed the benchmark’s by 1.4%. Most of this weakness was caused by Lamb Weston Holdings, one of the world’s largest producers of french fries. While demand began to rebound as economic activity increased, cost pressures have significantly dampened the margin outlook for the foreseeable future.
For the nine months ended September 30, 2021, the total return on the Fund’s net asset value (“NAV”) per share (with dividends and capital gains reinvested) was 14.9%. This compares to a 15.9% total return for the S&P 500 and a 14.9% total return for the Lipper Large-Cap Core Funds Average over the same time period. The total return on the market price of the Fund’s shares for the period was 15.4%.
For the twelve months ended September 30, 2021, the Fund’s total return on NAV was 28.2%. Comparable figures for the S&P 500 and Lipper Large-Cap Core Funds Average were 30.0% and 28.6%, respectively. The Fund’s total return on market price for the period was 29.4%.
During the first nine months of this year, the Fund paid distributions to shareholders in the amount of $16.7 million, or $.15 per share, consisting of $.02 net investment income and $.02 long-term capital gain, realized in 2020, and $.11 of net investment income realized in 2021, all taxable in 2021. These constitute the first three payments toward our annual 6.0% minimum distribution rate commitment.
2​
​
Letter to Shareholders (continued)
​
Looking ahead, we remain positive on the market, despite our belief that supply chain disruptions and inflationary pressures seem likely to linger into 2022. Those issues, along with the unpredictability of COVID-19 threats, remain risk factors, as do the market’s above-average valuations and investor sensitivity to the Fed’s moves and statements. We could well see more short-term volatility in equity markets, especially as investors anxiously watch the U.S. stimulus bills. Still, the economic recovery from the pandemic continues, supported by record-high savings levels and the likely continuance of fiscal and monetary stimulus. The potential for short-term ups and downs only reinforces the importance of stock selection, and we believe our focus on that, along with our disciplined investment approach, will carry us through. As always, we appreciate the trust you place in us.
By order of the Board of Directors,

Mark E. Stoeckle
Chief Executive Officer & President
October 21, 2021
​
​
Disclaimers​
This report contains “forward-looking statements” within the meaning of the Securities Act of 1933 and the Securities Exchange Act of 1934. By their nature, all forward-looking statements involve risks and uncertainties, and actual results could differ materially from those contemplated by the forward-looking statements. Several factors that could materially affect the Fund’s actual results are the performance of the portfolio of stocks held by the Fund, the conditions in the U.S. and international financial markets, the price at which shares of the Fund will trade in the public markets, and other factors discussed in the Fund’s periodic filings with the Securities and Exchange Commission.​
This report is transmitted to the shareholders of the Fund for their information. It is not a prospectus, circular or representation intended for use in the purchase or sale of shares of the Fund or of any securities mentioned in the report. The rates of return will vary and the principal value of an investment will fluctuate. Shares, if sold, may be worth more or less than their original cost. Past performance is no guarantee of future investment results.
3
​
Summary Financial Information
​
(unaudited)
​
*
Annualized
​
Ten Largest Equity Portfolio Holdings
​
September 30, 2021
(unaudited)
4​
​
Schedule of Investments
​
September 30, 2021
(unaudited)
5
​
Schedule of Investments (continued)
​
September 30, 2021
(unaudited)
6​
​
Schedule of Investments (continued)
​
September 30, 2021
(unaudited)
7
​
Schedule of Investments (continued)
​
September 30, 2021
(unaudited)
8​
​
Schedule of Investments (continued)
​
September 30, 2021
(unaudited)
Total Return Swap Agreements — 0.0%
​
(a)
Common stocks are listed on the New York Stock Exchange or NASDAQ and are valued at the last reported sale price on the day of valuation.​
​
(b)
Presently non-dividend paying.
​
(c)
Non-controlled affiliate, a closed-end sector fund, registered as an investment company under the Investment Company Act of 1940.
​
(d)
Controlled affiliate valued using fair value procedures.
​
(e)
Rate presented is as of period-end and represents the annualized yield earned over the previous seven days.
​
(f)
Counterparty for all open total return swap agreements is Morgan Stanley. At September 30, 2021, $450,000 in cash collateral was held by the Fund.
​
(g)
During the nine months ended September 30, 2021, investments in affiliates were as follows:
​
Information regarding transactions in equity securities during the quarter can be found on our website at: www.adamsfunds.com.
9
​
Adams Diversified Equity Fund, Inc.
​
Board of Directors
​
(1)
Member of Executive Committee
​
(2)
Member of Audit Committee
​
(3)
Member of Compensation Committee
​
(4)
Member of Nominating and Governance Committee
​
(5)
Chair of the Board
​
Officers
​
500 East Pratt Street, Suite 1300, Baltimore, MD 21202
410.752.5900   800.638.2479
Website: www.adamsfunds.com
Email: investorrelations@adamsfunds.com
Tickers: ADX (NYSE), XADEX (NASDAQ)
Independent Registered Public Accounting Firm: PricewaterhouseCoopers LLP
Custodian of Securities: The Northern Trust Company
Transfer Agent & Registrar: American Stock Transfer & Trust Company, LLC
Stockholder Relations Department
6201 15th Avenue
Brooklyn, NY 11219
(877) 260-8188
Website: www.astfinancial.com
Email: info@astfinancial.com
Adams Diversified Equity (NYSE:ADX)
Historical Stock Chart
Von Jun 2022 bis Jul 2022 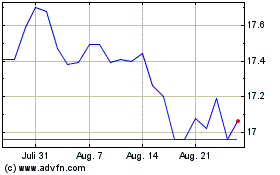 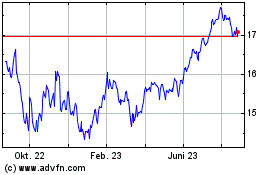 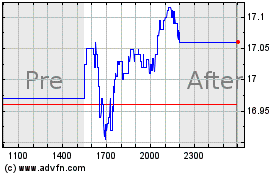