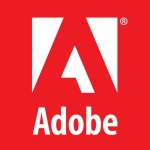 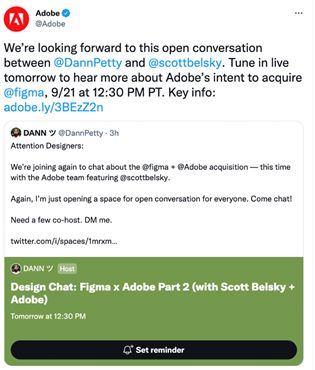 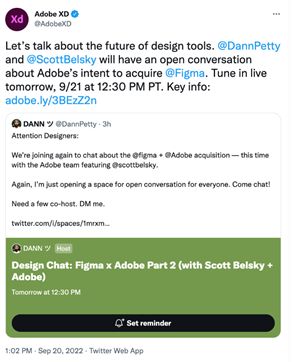 In addition to historical information, this communication contains forward-looking statements within the meaning of applicable securities law, including statements regarding the expected completion and effects of the proposed transaction, product plans, future growth, market opportunities, strategic initiatives and industry positioning. In addition, when used in this communication, the words “will,” “expects,” “could,” “would,” “may,” “anticipates,” “intends,” “plans,” “believes,” “seeks,” “targets,” “estimates,” “looks for,” “looks to,” “continues” and similar expressions, as well as statements regarding our focus for the future, are generally intended to identify forward-looking statements. Each of the forward-looking statements we make in this communication involves risks and uncertainties that could cause actual results to differ materially from these forward-looking statements. Factors that might cause or contribute to such differences include, but are not limited to: expected revenues, cost savings, synergies and other benefits from the proposed transaction, such as Adobe’s ability to enhance Creative Cloud by adding Figma’s collaboration-first product design capabilities and the effectiveness of Figma’s technology, might not be realized within the expected time frames or at all and costs or difficulties relating to integration matters, including but not limited to customer and employee retention, might be greater than expected; the requisite regulatory approvals and clearances for the proposed transaction may be delayed or may not be obtained (or may result in the imposition of conditions that could adversely affect the combined company or the expected benefits of the proposed transaction); the requisite approval of Figma stockholders may be delayed or may not be obtained, the other closing conditions to the transaction may be delayed or may not be obtained, or the merger agreement may be terminated; business disruption may occur following or in connection with the proposed transaction; Adobe’s or Figma’s businesses may experience disruptions due to transaction-related uncertainty or other factors making it more difficult to maintain relationships with employees, customers, other business partners or governmental entities; the possibility that the proposed transaction is more expensive to complete than anticipated, including as a result of unexpected factors or events; diversion of management’s attention from ongoing business operations and opportunities as a result of the proposed transaction or otherwise and those factors discussed in the section titled “Risk Factors” in Adobe’s Annual Report on Form 10-K and Adobe’s Quarterly Reports on Form 10-Q. The risks described in this communication and in Adobe’s filings with the U.S. Securities and Exchange Commission (the “SEC”) should be carefully reviewed. Undue reliance should not be placed on these forward-looking statements, which speak only as of the date they are made. Adobe and Figma undertake no obligation to publicly release any revisions to the forward-looking statements or reflect events or circumstances after the date of this communication, except as required by law.

No Offer or Solicitation
This communication shall not constitute an offer to sell or the solicitation of an offer to buy any securities, nor shall there be any sale of securities in any jurisdiction in which such offer, solicitation or sale would be unlawful prior to registration or qualification under the securities laws of any such jurisdiction. No offering of securities shall be made except by means of a prospectus meeting the requirements of Section 10 of the Securities Act of 1933, as amended.

Investors and security holders may obtain copies of these documents, when available, as well as other documents filed by Adobe with the SEC, free of charge from the SEC’s website at www.sec.gov or by accessing Adobe’s website at http://www.adobe.com/investor-relations or by contacting Adobe’s Investor Relations department by calling (408) 536-4700, by writing to Investor Relations, Adobe Inc., 345 Park Avenue, San Jose, California 95110-2704 or by sending an email to adobe@kpcorp.com.
Adobe (NASDAQ:ADBE)
Historical Stock Chart
Von Okt 2022 bis Nov 2022 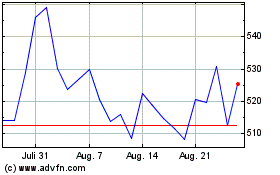 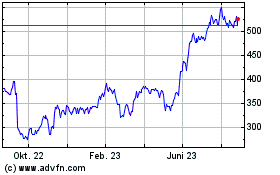 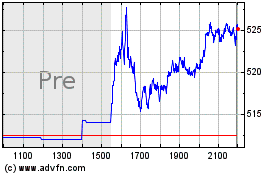