165,88
-1,90 (-1,13%)
Real-Time
Markt Geöffnet
165,88
Polygon Sees Large Volume Of MATIC Whale Transactions In Last 24 Hours
05 November 2022 - 01:03PM
NEWSBTC
The Polygon network is now lit like Christmas lights following a number of positive MATIC news that involve some of the biggest names in social media and finance industry. For starters, Instagram users will soon have the ability to mint, showcase and even sell non-fungible token (NFT) collectibles through the blockchain network. Two days ago, Meta, the owner of the social media platform, announced it will soon test said functionality to a small number of creators in U.S. before expanding to other countries. Meanwhile, financial services global leader JPMorgan Chase successfully executed its first ever live trade on blockchain in line with the Monetary Authority of Singapore (MAS) Project Guardian. The iconic financial institution took advantage of Polygon network’s cheap transaction fees to issue and trade tokenized assets in its first attempt in exploring the Decentralized Finance (DeFi) banking sector. Related Reading: SushiSwap Suffers Monthly Drop In TVL – How Will SUSHI Perform This November? Polygon Responds Accordingly MATIC, the native cryptocurrency of the blockchain system witnessed an unprecedented rally following the above-mentioned developments, going up by almost 30% over the last seven days. According to tracking from Coingecko, the altcoin is changing hands at $1.21 at press time and has increased by more than 8% for the past 24 hours. On its biweekly and monthly charts, the Polygon owned digital currency has gone up by 45.4% and 42%, respectively. It has also witnessed significant capital inflow as it increased its overall valuation, which now currently stands at $10.73 billion, by more than 22% – enough for the asset to maintain its rank as the 11th largest cryptocurrency in terms of market capitalization. MATIC also reduced its year-to-date losses to just 37.2% although it is still down by almost 59% from its December 27, 2021 all-time high (ATH) value of $2.92. MATIC Whales Make Their Move Over the last 24 hours, the Polygon network was in frenzy when transaction volumes involving whales soared, currently being considered as the highest in an eight-month time frame. But a deep dive into related data revealed some of the whales may have started accumulating MATIC tokens as early as two weeks ago in anticipation of the massive surge being exhibited by the crypto right now. It would appear that some of these investors timed their trades in order to gain bigger profit which, basically, is the ultimate goal in the crypto space. This is evidenced by the sharp decline in supply of the cryptocurrency among major exchange platforms last October 11. Related Reading: Why Monero Is Struggling To Crack This Resistance Level Since September MATIC total market cap at $10.5 billion on the weekly chart | Featured image from Analytics Insight, Chart: TradingView.com Disclaimer: The analysis represents the author's personal understanding of the crypto market and should not be construed as investment advice.
Monero (COIN:XMRUSD)
Historical Stock Chart
Von Jan 2023 bis Feb 2023 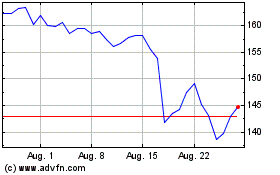 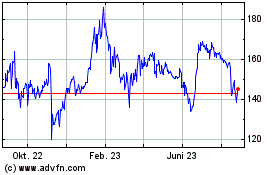 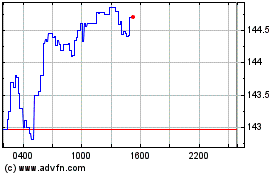