0,00268
0,00 (0,00%)
Real-Time
Markt Geöffnet
0,00268
Bandanna Sporting Crypto Punk #5822 Sets New Record As It Sells For $23M
14 Februar 2022 - 06:00PM
NEWSBTC
A CryptoPunk NFT has just set the record for the highest-selling punk so far. The collection which is more than three years old had been in obscurity for the longest time but with the rise of NFT popularity, they have become one of the most valuable collections in the NFT space. In a recent sale, CryptoPunk #5822 has set the record for the high-selling punk after selling for $23 million. CryptoPunk #5822 Sells For 8,000 ETH The CryptoPunk #5822 which had sold for 8,000 ETH, more than $23 million had been bought by the CEO of Chain, Deepak Thapliyal. It is the most expensive CryptoPunk NFT to be sold to date. Only one of 10,000 CryptoPunks that was created in 2017, the original owner of the CryptoPunk had paid less than 1 ETH for the piece. They had then held through the initial boom of the collection until now, where they finally sold their punk for more than 7,999 ETH in profit. Relaed Reading | Maximize Your Crypto Holdings With High Yield Farming On BNB100X It is no surprise that this one CryptoPunk had sold for this price. There have been a number of CryptoPunks that have been sold for significant amounts of money, running into the tens of millions of dollars. In total, the CryptoPunk collection has seen more than $9.3 billion in trading volume since it was first launched. Thapliyal who purchased CryptoPunk #5822 had leveraged his Compound Finance account to purchase the piece, according to him. It is important to note that the CEO had purchased what is one of the rarer CryptoPunks. This piece which is considered an “alien” in the compilation is one of only nine such pieces in the collection. This is why itself and its other eight counterparts are so expensive. Despite its high price tag, it is still not the most expensive NFT sold to date. That title belongs to Beeple’s Everydays NFT sale that took the market by storm. The piece had sold for a whopping $69 million, creating a record that no one has been able to break. NFT Holder Turns Down $1.2 Million While the CryptoPunk #5822 NFT is making waves in the space for its high price tag, another piece had made it into the spotlight for refusing to sell for a high price tag. The Bored Ape Yacht Club is an infamous collection of 10,000 NFTs that have also made its mark for selling expensive NFT pieces. Its pieces have sold across the board for millions of dollars but one holder is not partaking in this. Relaed Reading | Axie Infinity Smooth Love Potion (SLP) Explodes With 300% Gain This February The Golden Ape #1726 had turned down an offer to purchase their Ape for 420 ETH – $1.2 million. The holder of the Ape revealed to CryptoPotato that they had turned down the offer because it was basically a lowball offer. The piece is a rare one, one out of 46 gold fur apes that were released in the BAYC collection. Of all 46, only 1 piece has been sold below 1,000 ETH. “I rejected it [read: the offer] because gold fur apes are the rarest fur of BAYC. Also, it’s my personal brand, and I think with this brand, and owning the ape, I can continue to make residual income,” they told CryptoPotato. “There is only 1 out of 46 gold fur apes listed for sale below 1000 ETH and I would like to still be a part of that group.” The same user told the publication that they hold another 36 Apes in their collection. So they are not exactly hurting for cash as the case may be. Featured image from CryptoSlate, chart from TradingView.com
Smooth Love Potion (COIN:SLPPUSD)
Historical Stock Chart
Von Nov 2022 bis Dez 2022 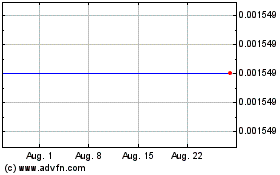 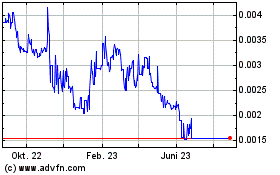 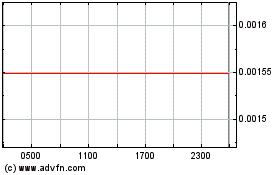