0,8558
0,003 (0,35%)
Real-Time
Markt Geöffnet
0,8558
Sandbox (SAND) Price Up 76% Since June Courtesy Of Metaverse Hype
12 August 2022 - 05:45PM
NEWSBTC
The Sandbox (SAND) has been showing bullish signals and rising steadily, recording a 0.5% spike in the market. Sandbox price on an uptrend; rises by 76% SAND price trades upwards; depicting a long-term bullish trend Sandbox is bullish due to an increased investor and influencer interest  The market has seen aggressive strides in the past couple of weeks which is forecasted to be long-term. According to CoinMarketCap, The Sandbox (SAND) is down by 3.1% or at $1.30 as of this writing. Related Reading: SOL Makes Another Shot At $44, After Two Failed Attempts This Week SAND Blows Past 75% On Influence Boost SAND was seen to spike by 76% since June 19. The growth is brought about largely by the influence of metaverse platforms like Sandbox which has generated a great deal of interest from popular influencers and personalities online as well as a huge part of blockchain users who continuously support these platforms. For instance, famous socialite Paris Hilton has a Malibu mansion on Sandbox and is organizing events for fans that allow everyone to interact virtually with her. Hilton’s partnership with Sandbox has generated a lot of attention for SAND and also the metaverse events she has in store for her solid fans on Sandbox. Related Reading: Cardano Tests $0.51 Support – Can ADA Reach Safe Zone And Hit $0.67? SAND’s price growth is mainly triggered by its wide expansion internationally and in other markets. Additionally, Sandbox is also said to begin partnerships with local businesses for a pop-up atelier. These developments have propelled SAND’s prices way up as investors are now excited with the evolution of the metaverse industry and want to be a part of the metamorphosis. On the recent chart, the market has registered small gains which are said to be a perpetuation of the sideways market that has been lingering for the past couple of weeks. SAND is seen to continue with its current trading direction or the sideways market in the next trading sessions with prices that could potentially trade below $1.49. On the other hand, if the prices hover above the key resistance of $1.49, this will indicate the continuation of a bull run. What Is The Sandbox? The Sandbox (SAND) is an interactive virtual Ethereum-based world that enables players to create, build, explore, socialize, trade, and monetize digital assets and game experiences. The platform is powered by SAND, its native currency, which is utilized for interactions and transactions made in the virtual world. The Sandbox provides players with a safe gaming landscape that keeps players secure from crypto market volatility and crashes. While the Sandbox has been criticized a lot of times as it heavily relies on cryptocurrencies which are highly volatile, the platform remains to be one of the most popular and trusted projects in the GameFi space. SAND total market cap at $1.6 billion on the daily chart | Source: TradingView.com Featured image from Yahoo Finance, Chart from TradingView.com
Sandbox (COIN:SANDUSD)
Historical Stock Chart
Von Aug 2022 bis Sep 2022 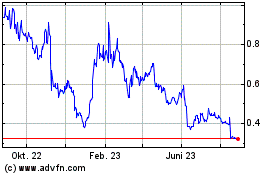 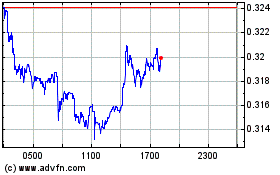