0,06132
0,00042 (0,69%)
Real-Time
Markt Geöffnet
0,06132
Monero And Zcash Take Off With 15% Gains, Here’s What May Have Spurred The Rally
09 März 2022 - 07:00PM
NEWSBTC
Privacy coins, Zcash (ZEC) and Monero (XMR), have been outperforming larger cryptocurrencies in the last 24 hours. The sudden surge on the price of these cryptocurrencies seems to be responding to recent developments around the Russia-Ukraine conflict, and the signed of an executive order from the U.S. Joe Biden administration. Related Reading | Monero (XMR) Price Slides As Canada Includes Crypto In Emergencies Act At the time of writing, Zcash (ZEC) records a 11.7% profit trading at $142, while Monero (XMR) records a 15.5% profit trading at $195. These cryptocurrencies have been following the general sentiment in the crypto market flipping towards a more positive stands as Bitcoin breaks above $41,000. Zcash And Monero React To A FED Coin As mentioned, the U.S. President Joe Biden has signed an executive order which has surprise for its positive approach to cryptocurrencies and digital assets. As the war between Russia and Ukraine ranges on, the International Community has quickly imposed financial sanctions of Putin, the Russian elite, and its banking system. As Coin Center’s Executive Director Jerry Brito said, mainstream media have been pushing a negative narrative around cryptocurrencies. Classifying them as “dangerous”, and with the potential to allow Russia to evade sanctions. Fortunately, some U.S. government officials have also look at the other side of the coin. The core message in this executive order, as Brito said, is a serious acknowledgment from the U.S. Federal Government of cryptocurrencies as legitimate assets. The crypto market seems to have gotten used to negative or nothing messages from the U.S., thus, why this news could have been translated into a relief rally. Jake Chervinsky, Head of Policy at the Blockchain Association, commented the following on Biden’s executive order and why it has been perceived as bullish by market participants: Anyone worried that President Biden’s executive order would spell doom & gloom for crypto can fully relax now. The main concern was that the EO might force rushed rulemaking or impose new & bad restrictions, but there’s nothing like that here. It’s about as good as we could ask. In addition to the total surge in cryptocurrencies, privacy coins like Zcash and Monero seem to have benefited from the shift in narrative. The executive order also contemplates the creation of a U.S. Central Bank Digital Currency (CBDC). This assets have been perceived as the oppositive of Bitcoin, Zcash, and Monero. Rather than give individuals power over their finances, they seem to provide governments with absolute control and oversight on the national currency. Thus, why some investors might have decided to increase their ZEC and XMR holdings. POTUS: “My Administration places the highest urgency on research and development efforts into the potential design and deployment options of a United States CBDC” FedCoin 🚨 Worth noting this entire executive order on digital assets is heavy on CBDCs, doesn’t mention Bitcoin pic.twitter.com/PuXtVI34hD — Alex Gladstein 🌋 ⚡ (@gladstein) March 9, 2022 Privacy About To Gain More Relevance? Other privacy coins have seen a similar rally with Dash (DASH) recording a 12.8% increase over the past day. Oasis Network (ROSE), Secret (SCRT), Horizen (ZEN), and Keep Network (KEEP) averaging a similar profit during the same period. In low timeframes, data from Material Indicators suggest retail investors have been leading ZEC and XMR rallies. Investors with bid order of around $100 injected close to $1 billion in liquidity for the ZEC/USDT trading pair. Related Reading | Monero (XMR) Readies For A Breakout As It Touches Important Milestone The XMR/USDT trading pair has seen a similar story. Retail investors are also leading the rally in lo timeframes.
Oasis Network (COIN:ROSEUSD)
Historical Stock Chart
Von Aug 2022 bis Sep 2022 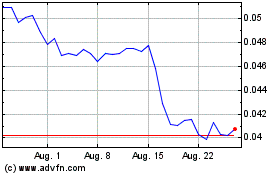 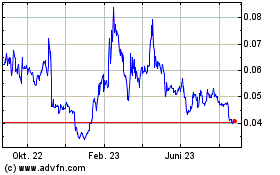 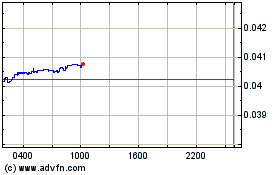