145,51
1,53 (1,06%)
Real-Time
Markt Geöffnet
145,51
Altcoin Exchange Dominance Rises To 50%, What Does It Mean For Bitcoin?
24 Oktober 2022 - 09:00PM
NEWSBTC
Data shows the altcoin dominance by volume on exchanges has now risen to 50%, here’s what happened to Bitcoin the last two times the crypto market saw such a shift. Altcoins Are Now Contributing To 50% Of The Volumes On Exchanges As pointed out by an analyst in a CryptoQuant post, altcoins have started to dominate after Bitcoin was number one for an entire month. The relevant indicator here is the “trading volume,” which is a measure of the total amount of coins being traded on centralized exchanges. The percentage to this total trading volume being contributed by an individual crypto is called its “dominance by volume.” Here is a chart that shows how the Bitcoin, Ethereum, and altcoin dominances have stacked up against each other during the last month: The value of the metric seems to have declined for BTC in recent days | Source: CryptoQuant As you can see in the above graph, Bitcoin had the largest individual share for much of the past month, but that has changed during the last few days. BTC’s dominance of the trading volume dropping off has given more room to the altcoins, who now contribute to around 50% of the volumes on exchanges. Related Reading: Bitcoin Bearish Signal: Dormant Supply On The Move Again As for Ethereum, the crypto’s volume hasn’t observed any significant shifts recently, with the coin’s dominance moving sideways just below the 30% mark. During the past year, there have been two stretches where altcoins have enjoyed a similar dominance. The below chart shows how the price of Bitcoin behaved while these periods lasted. Looks like the altcoin dominance reached as high as 60% during these stretches | Source: CryptoQuant From the graph, it’s apparent that the first of these altcoin dominated periods occurred back between November 2021 and January 2022. At the start of this timespan, the price of Bitcoin was around $67k, but by the end of it the crypto had declined to just $36k. The second spell of high altcoin volume took place between April and June of this year, and much like the in first stretch, BTC observed a significant drawdown as its price went from $47k all the way down to $20k. Related Reading: TOP 5 Cryptos To Watch This Week – BNB, BTC, ETH, MATIC, APT If the altcoins continue their recent surge in trading dominance on exchanges, and a similar trend as during these previous instances follows now as well, then it may prove to be troubling times for Bitcoin. Bitcoin Price At the time of writing, Bitcoin’s price floats around $19.3k, down 1% in the last week. Over the past month, the crypto has gained 1% in value. BTC continues to be stuck in consolidation | Source: BTCUSD on TradingView Featured image from Traxer on Unsplash.com, charts from TradingView.com, CryptoQuant.com
Quant (COIN:QNTUSD)
Historical Stock Chart
Von Jan 2023 bis Feb 2023 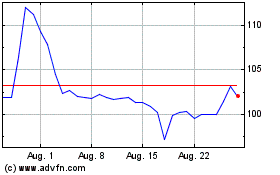 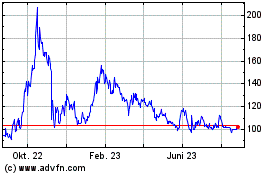 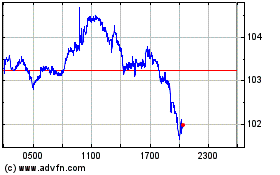