0,7738
-0,004 (-0,51%)
Real-Time
Markt Geöffnet
0,7738
Polygon Maintains Solid Footing As MATIC Balloons By 300% Since June
11 August 2022 - 05:10PM
NEWSBTC
Polygon (MATIC) price prediction relies heavily on the CPI numbers for July. Polygon price soared by 125% since July 1; Analysts spotted a rally of 68% catapulting to an 85% boost in terms of profit. MATIC price has overlapped targets found in the $1.25 mark; retracement is still a possibility at $0.64. A break below the $0.54 mark hints at an invalidation of MATIC’s uptrend movement. Evidently, the crypto market has been extremely volatile seen early this week. On the other hand, investors are still on pause waiting for the CPI print.  Apparently, MATIC has dropped by 0.06% since yesterday. Related Reading: Cardano Tests $0.51 Support – Can ADA Reach Safe Zone And Hit $0.67? Polygon Price Jump By 5.04% According to CoinMarketCap, Polygon trades at $0.9361 or registering a price jump of 5.04% as of this writing. Early this week, MATIC’s price didn’t make it to $1 again but it still has shown an impressive recovery since it slumped at a low of $0.31 as seen in June. MATIC price has since then soared by as much as 300%.  In most parts, Polygon was barred somewhat from escalating further by the tremendous volatility experienced by Bitcoin. As of press time, Polygon’s TVL is at $1.69 billion but it has experienced a gradual decline in terms of TVL seen in the early months of 2022. In the same way, Ethereum has also shaved off as much as $3.5 billion in TVL seen in the past seven months which has negatively impacted MATIC price which is currently trading at 69.5% which is way below its ATH. Polygon Gunning For $1 According to the MATIC technical analysis, the bulls still have some power left as the coin is still pumping the price up on a constant uptrend. With that being said, a retest at $1 is a possibility but it will all depend on the result of the July CPI print. So, if the inflation numbers spike, the MATIC price might possibly retest the 200-day EMA right at $0.81. On the other hand, if the inflation plummets, then the market could improve rapidly which could improve the prediction for MATIC price peaking at $1.05. Related Reading: Monero Faces Pressure In Keeping Upward Pace – Will XMR Overcome Resistance? The recent price pump of Polygon was first spotted on July 27. There is seen to be a mild pullback which gives the bears a green light to close orders and jump in with the bulls. So, if the technical analysis proves to be accurate, a second breach seen at $0.61 could potentially punch a bullish movement shooting for $1. Either way, this would still mean a price rally for MATIC. MATIC total market cap at $7.6 billion on the daily chart | Source: TradingView.com Featured image from The Economic Times, Chart from TradingView.com
Polygon (COIN:MATICUSD)
Historical Stock Chart
Von Sep 2022 bis Okt 2022 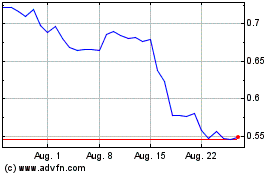 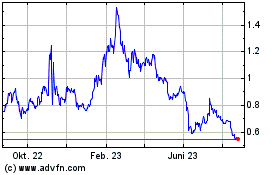 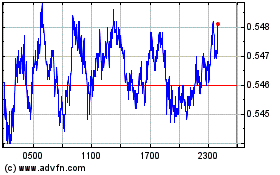