0,1722
0,0007 (0,41%)
Real-Time
Markt Geöffnet
0,1722
Floki Inu To Feature Its Logo On S.S.C. Napoli’s Match Stadium And Jersey
01 Dezember 2021 - 07:00PM
NEWSBTC
The popularity and influence of digital assets keep surging as different sectors keep sticking to them. Among other mainstreams involved in cryptocurrency, the sporting portals and industry as a whole are not left out. Recently, S.S.C. Napoli, an Italian football giant, signed a Floki Inu (FLOKI) token sponsorship deal. This deal will enable the cryptocurrency to feature its logo on both the team’s jersey and stadium. Founded in 1926, S.S.C. Napoli is among the prominent and leading Italian professional teams. In 1987, Diego Maradona, the legendary football icon, led the team to its first victory in Serie A title. Presently, the group maintains the first position in the 2021-2022 league session. The route of Floki Inu in football partnership with clubs has a similar trend as that of FTX, a top crypto exchange. The latter made numerous partnership involvements with sporting clubs this year. Related Reading | Bitcoin Mining Firm Argo Blockchain To Raise $57.5M Via Senior Notes Offering Through this recent sponsorship deal, Floki Inu just included Napoli to its football clubs’ list. The Cadiz in Spanish La Liga and the Kerala Blasters in the Indian Super League are other clubs on the list. Also, earlier in the month, Floki Inu completed an endorsement deal with Tyson Fury, a boxing star. The terms included a promo to feature the two-time world heavyweight champion in Floki’s upcoming NFT play-to-earn game, Valhalla. FLOKI trading in the green | Source: FLOKIUSDT on TradingVieew.com An announcement from the football team on Tuesday disclosed the featuring of the Floki Inu logo at the back of the team’s jerseys. Also, some LED signs within Napoli’s home stadium will display the logo, serving as a reminder of the ongoing league session. The logo will comprise a Shiba Inu dog that wears a Viking helmet. One of Napoli’s supporters, Jay Cassano, expressed his excitement about the sponsorship and the club’s involvement with cryptocurrency. He mentioned that such partnerships create the right pathway for increased mainstream adoption of cryptocurrency. He recalled the recent interest from some crypto firms on sports teams.  Floki Inu Sponsorship Terms Still Unknown There’s still no disclosure of Napoli specifying if the sponsorship is a multi-year deal. Also, the amount that Floki Inu invested in the deal is still unknown. However, the marketing department of Floki Inu acknowledges in the announcement the company’s move as part of the project’s goal. This was to push the cryptocurrency as the global most used and known digital asset. Since last September, the Floki team has maintained a high marketing push for the project’s promotions. The team has about $1.5 million in allocations for its campaigns on adverts. Related Reading | Bitcoin Mining In The U.S.: 4 States Attract The Most Miners One of its key target locations is London, as it features its branding through several transportation services within the city. However, the advertising move created controversies by attracting the Advertising Standards Authority (ASA), the country’s advertising regulatory agent. BBC’s Friday report revealed that ASA had commenced a review of Floki’s ads. This will help the watchdog to ascertain if the firm broke any advertising rules. On its part, the Floki Inu team insists that its ads had legal clearance with disclaimers. Featured Image GameRevolution
ICON (COIN:ICXUSD)
Historical Stock Chart
Von Okt 2022 bis Nov 2022 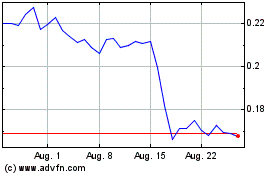 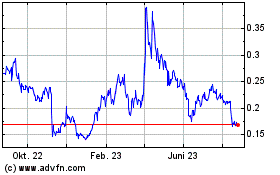 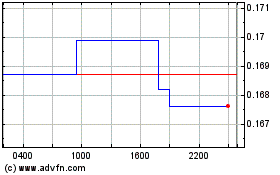