1,01
0,00 (0,00%)
Real-Time
Markt Geöffnet
1,01
New Study Reveals Best Stablecoin, Why DAI Took The Crown
15 Oktober 2022 - 12:00AM
NEWSBTC
Decentralized stablecoin DAI, native to Maker protocol, might become a major leader in the sector over the coming years. The digital asset was the most stable of the stablecoin in a period of 9 months, according to research published by Best Brokers. Related Reading: Ethereum Name Service (ENS) Moves Silently With 20% Rise, Will Price Retest $27? A stablecoin is a digital asset whose value is pegged to the U.S. dollar in a 1:1 parity. The concept is controversial in the crypto industry, as some of the most popular and valuable stablecoins have de-pegged and become unstable at some point except for those tokens considered “too centralized” by the community. Users have been looking for a decentralized stablecoin for years, and with the failed Terra ecosystem, DAI might take this place and take over market share from the largest stablecoins, Tether (USDT) and USD Coin (USDC). DAI More Stable Than Any Other Stablecoin The study used data from Dune Analytics and explore popular stablecoins BUSD, DAI, FRAX, LUSD, USDC, and USDT. The research concluded that FRAX saw the least price deviation over the past 9 months. The digital asset was stable at 99.75% of these periods, followed by DAI at 95.73%, and USDC at 99.72%. LUSD was the most unstable with a 0.5% deviation from its $1 peg at 53% of the 9-month period. Of the stablecoins in the study, DAI, BUSD, and USDC have never deviated below $0.995 to the downside and $1.005 to the upside. As seen in the chart below, Tether (USDT) was the largest stablecoin with the largest percentage in price deviation over the past 9 months at 0.78%. However, DAI took the top spot in the least deviation percentage from its peg. The decentralized stablecoin fluctuated 0.5% from its normal value, 0.27% of the 9 months probed by the study. Thus, DAI is the steadiest stablecoin deviating to only $0.99640185 of its 1:1 value with the U.S. dollar. USDC closely follows in the second place with a $0.9962163333 deviation. Tether showed the worst performance in the research with a deviation of $0.97, as seen in the chart below. Alan Goldberg, market analyst at BestBroker, stated the following on their results, and DAI’s potential to attract institutions purely based on its stability: DAI’s stability is considerable. A lot of corporate adopters would prefer having assets that aren’t volatile as they already have to deal with competition, inflation, market conditions, etc. Having that in mind makes DAI very serious competition to the likes of USDC. Related Reading: Uniswap Soars 14% In Last 24 Hours – Can UNI Slingshot Past $6? Stablecoins have been a controversial topic in crypto since the collapse of LUNA and TerraUSDT. However, the demand for a decentralized stable medium of exchange remains high with DAI poised to continue gaining relevance in this sector. Goldberg added: Although the DAI’s supply is low, compared to USDC, USDT and BUSD, it is still sizeable and makes it usable by big companies. When we consider both the low deviation and the most stable price, DAI can be considered as the most stable coin for the last 9 months and a serious contender to compete with the other ‘big’ stablecoins.
Frax (COIN:FRAXUSD)
Historical Stock Chart
Von Dez 2022 bis Jan 2023 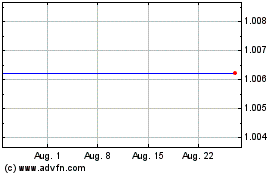 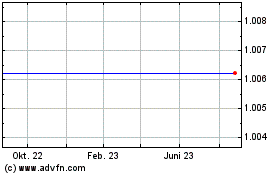 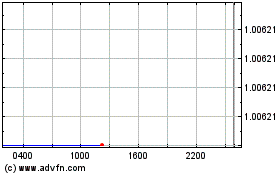