0,9998
0,00203 (0,20%)
Real-Time
Markt Geöffnet
0,9998
Celsius Beats Down Liquidation Price With $120 Million In Loan Repayments
05 Juli 2022 - 07:00PM
NEWSBTC
Celsius has been at the center of most crypto controversies in the last month. The lending platform had had to pause withdrawals, transfers, and swaps on its platform, citing extreme market conditions as the reason, but that was only the beginning of its troubles. However, Celsius looks to be taking it on the chin because contrary to what others have done, the platform has made moves to pay down its debts and has now beaten down its liquidation price by more than 200%. Celsius Pays $120 Million In Loans The beginning of the week came with good news for the Celsius lending platform which had been able to put more money towards its loans. Previously, the company had added 7,000 BTC that had brought its liquidation price down to $16,582 but remained at risk given the volatile nature of bitcoin. That is why the company has continued to add to its position to beat down the liquidation price to save the platform. Related Reading | Mounting Support For Bitcoin At $19,000 As Market Ushers In A New Week Over the weekend, it was reported that Celsius had padded up its position once more, and in a series of repayments since July 1st, the lending platform has paid a cumulative $142.8 million. The latest of these payments had been the most prominent with the platform paying $64 million in DAI stablecoin towards its loans. This payment had come hours after another significant repayment of $50 million in DAI stablecoins. As it stands, Celsius has managed to beat its liquidation price down to $4,967, a more comfortable point for the lending protocol and its users who are still hoping to get back their coins that are now stuck on the platform. Celsius’s outstanding loans now sit at $82 million with an overcollaterization ratio above 577%. CEL token trading at $0.89 | Source: CELUSD on TradingView.com Will Users Get Their Coins Back? Celsius is yet to address users on if they will be getting their funds which are stuck on the platform back. There is a good portion of the market that has considered these coins lost, but with Celsius’ multiple loan repayments, it continues to spark hope in the hearts of investors that they would be able to one day withdraw assets again. Related Reading | Active Ethereum Addresses Touch 2020 Levels, Will Price Follow? Users have reported that the lending protocol has continued to pay rewards on their holdings despite not being able to withdraw. Its native token, CEL, had seen a significant run-up after suffering a terrible loss following the announcement of blocked withdrawals.  Its last communique with the public had been through a Medium post where the platform announced that it continues to work towards stabilizing liquidity and restoring operations. The blog post did not contain information about when it will be restoring withdrawal options. However, it did state that it continues “to take important steps to preserve and protect assets and explore options available to us.” Featured image from Reuters, chart from TradingView.com Follow Best Owie on Twitter for market insights, updates, and the occasional funny tweet…
Dai Stablecoin (COIN:DAIUSD)
Historical Stock Chart
Von Nov 2022 bis Dez 2022 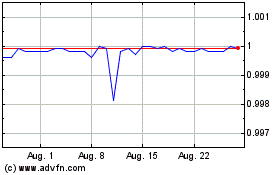 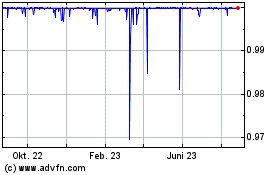 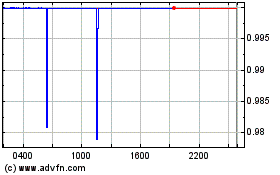