0,1092
-0,0022 (-1,97%)
Real-Time
Markt Geöffnet
0,1092
A Crypto War Is Raging – Crypto Donations Fuel Russia-Ukraine War
27 Februar 2022 - 02:59PM
NEWSBTC
More than $4 million have already been contributed to non-governmental organizations helping Ukraine from Russia’s unprovoked invasion of the country. A “crypto war,” according to analysts, has just begun. Meanwhile, as the panic of war depletes the country’s ATMs, many Ukrainians resort to Bitcoin. Elliptic, a blockchain analysis company in London, provided statistics on Friday revealing that crowdfunding has increased since Thursday, following Russia’s invasion of Ukraine. “On the 24th of February alone, one NGO got over $675,000 in Bitcoin, and by 9.30 a.m. on the 25th, it had already received more than $3.4 million – over $3 million of which was provided by a single contributor,” Elliptic said. This brings the total amount raised by these groups from the beginning of the invasion to more than $4 million, Elliptic said. Total crypto market cap at $1.738 trillion in the daily chart | Source: TradingView.com Crypto War: Who’s Winning? This increase in donations is part of a more significant trend by Ukrainian volunteers and NGOs who have been at the forefront of organizational efforts since the conflict began eight years ago with the separatist Donbas republics. Bitcoin was up 1.75% to $47,130 at the time of writing. The crypto fell to an early morning low of $46,173, before climbing to a high of $47,247, indicating a mixed start today. Related Article | Russian Politicians’ Crypto Wallets Targeted By Ukraine – Hefty Reward Up For Grabs “Cryptocurrencies may be used to crowdfund for the Ukrainian army or assist Russia in avoiding sanctions because there is no central authority who can impose their morality on its users,” Elliptic’s principal scientist and co-founder, Tom Robinson, said. “No one can prevent it from being used in either way.” One of the numerous costs of war is its impact on the global financial market. Experts also fear an enormous human toll, with Ukrainian President Volodymyr Zelensky declaring that more than 100 Ukrainians had been slain in the first 24 hours of the assault. Collateral Damage The invasion has thrown Ukrainian people’s lives into disarray, with many attempting to flee the nation. In contrast, Zelensky advises others to protect their homes against Russian soldiers and attacks. As Russian tanks roll into Ukraine, the two economies that have been at the forefront of adopting the new form of digital money are now using it to gain a competitive advantage in the geopolitical battle. For instance, Ukraine is seeking further measures of staving off Russia’s invasion on their country by going after government official’s crypto wallets. For the part of Russia, it has been reported that hackers from the country have allegedly launched cyberattacks on Ukraine’s private financial firms to break into their crypto reserves. A Tool That Changes The Game Early today, Crypto.com Coin was down 3.68%, bucking the trend. The remainder of the majors, on the other hand, had a bullish start to the day. This afternoon, (February 27), Bitcoin’s market dominance has increased by 0.13% to 41.89%, as statistical analysis has stated. Crypto analysts project that volatility in global financial markets, including cryptocurrencies, will follow as the war rages on. For the first time, the crypto era’s first significant battle also means that both sides have access to a tool that can quickly move billions of dollars across borders. Related Article | Russia Said SWIFT Ban Could Be Tantamount To A Declaration Of War Featured image from OpenSea, chart from TradingView.com
Cronos Coin (COIN:CROUSD)
Historical Stock Chart
Von Aug 2022 bis Sep 2022 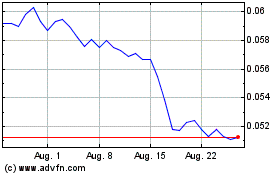 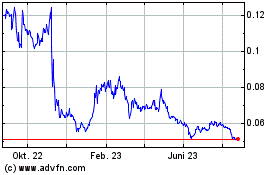 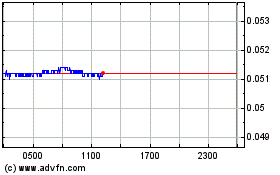