0,00503
0,0001 (2,03%)
Real-Time
Markt Geöffnet
0,00503
FTX New CEO John Ray Reveals More Scandals In Court Filing
17 November 2022 - 04:25PM
NEWSBTC
The new CEO of collapsed crypto exchange FTX, John Ray III, has filed an initial statement with the U.S. Bankruptcy Court for the District of Delaware, making a scathing judgment of Sam Bankman-Fried and his companies. Ray was appointed CEO of FTX less than a week ago when founder Bankman-Fried filed for bankruptcy protection for FTX, Alameda and more than 130 related companies and stepped down as CEO. The new CEO has taken the lead role in several of the largest corporate collapses in history, exposing criminal activity and malfeasance such as in the Enron case. So the man has experience with scandal and mismanagement. Yet, in his first court filing, he states: Never in my career have I seen such a complete failure of corporate controls and such a complete absence of trustworthy financial information as occurred here. “From compromised systems integrity and faulty regulatory oversight abroad, to the concentration of control in the hands of a very small group of inexperienced, unsophisticated and potentially compromised individuals, this situation is unprecedented,” Ray said. Related Reading: Paolo Ardoino Talks FTX, Adoption And Self-Custody With NewsBTC The new CEO also made it known that the Antigua and Bahamas-based FTX Group companies, in particular, did not have adequate corporate governance and many had never held a board meeting. FTX, FTX US and Alameda had virtually “no accounting department”. In addition, the bankruptcy trustee chalks up the lack of an accurate list of bank accounts and authorized signatories, as well as insufficient creditworthiness of bank partners. New FTX CEO Reveals Deep Swamp Of Bankman-Fried What else is Ray revealing? The bankruptcy trustee also stated, among other things, that the “fair value” of all cryptocurrencies held by FTX internationally is only $659! Further, Ray estimates the total of all consolidated assets to be around $2.56 billion. Only recently, SBF estimated the value at $5.5 billion on Twitter. Moreover, Ray also discloses the use of company funds to pay for houses and other items for employees. Literally users paid for SBF’s luxury mansion: I understand that FTX Group corporate funds have been used in the Bahamas to purchase homes and other personal property for employees and consultants. I understand that there appear to be no loan records for some of these transactions and that certain properties have been recorded in the Bahamian records in the personal names of these employees and consultants. In addition, it is alleged that there may “be very substantial transfers of Debtor property in the days, weeks and months prior to the Petition Date”. If this weren’t scandalous enough, Ray reveals that Bankman-Fried’s hedge fund has loaned $2.3 billion to… Sam Bankman-Fried himself, to his Paper Bird company. Want another scandal? The bankruptcy documents also disclose that FTX coded its liquidation protocol in such a way that Alameda was excluded from liquidation. Insane! Related Reading: This Firm Offers 8 To 12 Cents On A Dollar Of FTX User Deposit Claims But that’s far from all. Thus, under Bankman-Fried, FTX did not include customer liabilities in FTX’s financial statements. “I do not believe it appropriate for stakeholders or the Court to rely on the audited financial statements as a reliable indication,” Ray asserted. Ray also cannot answer the question of who was on Bankman-Fried’s company payroll. “The Debtors have been unable to prepare a complete list of who worked for the FTX Group as of the Petition Date.” Island Bay Ventures, the company that holds FTX’s stake in Scaramucci’s SkyBridge, is another major issue. Ray can’t find the company’s financials. The document also indicates that FTX loaned FTT token worth $250 million to BlockFi. Why? Possibly to prop up BockFi…. But there is also good news. The document reveals that SBF’s role in the bankruptcy is to be investigated.
Amp (COIN:AMPUSD)
Historical Stock Chart
Von Jan 2023 bis Feb 2023 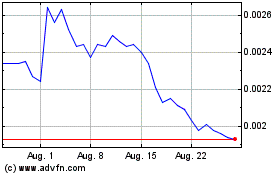 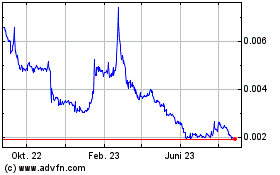 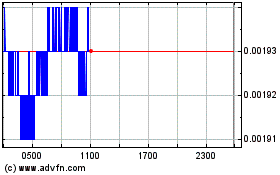